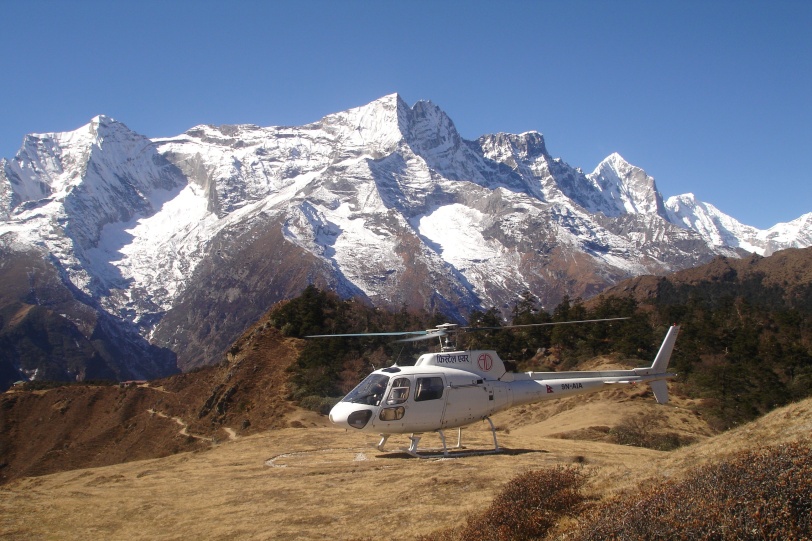 Fishtail Air Pvt. Ltd. is a helicopter charter company operating within Nepal, with its base in Kathmandu. The company was established in the year 1997 under the Air Operators Certificate issued by the government of Nepal. Since its commencement, the company has been actively involved in operation throughout the country with occasional Trans-border flights to Bhutan and India.

With a fleet of four helicopters, which includes two AS 350 B3 “Ecureuil”, one AS 350 B2 “Ecureuil”, and one Bell 206B III Jet Ranger helicopter, we have developed into the largest helicopter operator in Nepal.
Fishtail Air operates flights for sightseeing, rescue, medical evacuation, corporate movement, project support, expedition works or any other purposes that need the services of a Helicopter. We also operate support flights for trekking, which is getting really popular these days in the name of “Heli-Trekking”. Aerial sightseeing flights over the heritage and tourist spots is quite popular these days who would like to have a glimpse of tourist spots within the Kathmandu Valley in a short time and from different angle.

Rest assured, flying with us will be a special experience, as your safety and satisfaction are our prime concern. We give our best to cater to your needs and requirements. Thus, Fishtail Air has been able to make a prominent mark in the field of Helicopter in Nepal.

Fishtail Air Pvt. Ltd. has been taking the leading role in the field of Helicopter charter industry in Nepal. It has been operating two AS 350 B3 “Ecureuil”, one AS 350 B2 “Ecureuil” and one Bell 206B III Jet Ranger helicopter.

The AS 350B series (AS 350B, B2 & B3) of helicopters are all products of French helicopter manufacturing company Eurocopter. These are considered to be the best and strongest among the lightweight helicopters ever produced. AS 350 B3 chopper can reach where no lightweight helicopter can fly to. It can land upto an altitude of 23,000 ft. which makes it a veritable life-saver during high altitude rescue operations.

Bell Jet Ranger is a lightweight helicopter manufactured by Bell Textron Helicopters, USA. This aircraft has proved to be ideal for sightseeing and heli trekking flights to the Nepal Himalayas.

These aircrafts are regarded to be the most versatile and safest among light weight choppers. They can easily take off and land in a minor space and marginal weather conditions, making them apposite for mountain flying and all types of helicopter missions.