Located nearly 827m above sea level, Pokhara is a natural valley nestled in the foot-hill of Annapurna Himalaya and virgin Machhapuchhre or popularly known as Fishtail. The valley is surrounded three sides by green hills and on the north side it is well guarded by the mighty frozen wall. The tranquil valley Pokhara is blessed with many natural wonders and beauties like Numbers of blue water lakes,caves and naturals tunnels, amazing underground river with unbelievable feature of 200 meter deep and 2 meter wide in most of the places, beautiful hill stations and village settlements. View points flora and fauna.

Pokhara is only one place in Nepal as well as in the world to view a closer look of three eight thou senders out of fourteen in the world. The world’s beautiful and finest mountain the Machhapuchhre (fishtail) or the virgin Matterhorn is just 45 km away from a luxurious hotel room. The beautiful virgin peak is seen from all corner ofs Pokhara.

Pokhara lies 200 km west from Kathmandu and 179 km north from Lumbini. It is nearly in the central part of the country. The land elevation of Pokhara valley rises gradually to north reaching to height of 8091 meters above the sea level. The topographic variation provides a dramatic constant in the landscape. The northern horizon is defined by a seventy km long snow wall with many snow caped peaks. Geographically Pokhara lies between 83 58’ 30” east to 84” 02’ 30” east longitude and 28 10’ north to28 16’ North latitude. Pokhara. The total floor land area of Pokhara valley is 123 sq km.

Pokhara is just 200 km away from international airport, Kathmandu and 179 km from Indian boarder Sunauli. Pokhara is one of the easily accessible destinations of Nepal which connects by regular air and tourist buses services throughout the year from Kathmandu . Beside air and tourist bus services there are numbers of regular public transport services connecting Pokhara from different parts of the country like Kathmandu, Sunauli/Bhairahawa,Kakadbhtta, Nepalganja, Chitawan, Birganja, Mahendranagar and other  parts of the country. On top of that deluxe bus services are operated fourth times a week direct from Delhi (India) to Pokhara.

Pokhara is connected by two highways one from Kathmandu and another from Sunauli, near Indian boarder. Many feeder roads from different parts of the country have made Pokhara a year round accessible destination. The 22 minutes flight from Kathmandu provides you a wonderful opportunity to hug the beautiful Himalaya peaks next to your window.

The main tourist centre, the lake side and dame side areas are the first choice of many visitors to spend a night in Pokhara. Along the bank of nearly 3 km long Fewa Lake, most of the tourist activities are operated. Pokhara as we call it the tourist capital of Nepal is also the centre of luxury accommodation and delicious food. Recently Pokhara has also been popular for the honeymooner as well.

The average elevation of Pokhara valley is about 880 meter above the sea level whereas the surrounding mountains are more than 8000meter. Despite the amazing variation in elevations, the climate of Pokhara valley is pleasant and moderate throughout the year. It is neither harsh cold in the winter nor sweating hot in the summer. The average temperature during the winter and summer remains 10c and 26c respectively. The monsoon starts from early June and ends at early September whereas the winter remains for three months (November, December and January). Pokhara region lies between sub-tropical to tundra climatic zones and harbors different types of flora and fauna. Like wise varieties of wildlife and vegetation are also available in a great number.

Pokhara and its periphery

The inner circle of Pokhara is surrounded by beautiful small green rolling hills whereas the outer circle on the north side is well guarded by the high mountains and the panoramic range of high Himalayas. The village settlements and hill stations in the periphery are beautiful and pristine. The day hike center like Sarangkot, Kahu dada, Santi stupa (world peace pagoda), Bhadaure Tamgi, Foksing hill, Barahi temple, Nirmal Pokhari,Nuwakot, Mattikhan, Naudada , chandrakot and Pumdikot all are superb hill stations and sightseeing centre.

In all above listed day hike centre, one can start from Pokhara after early breakfast and trek for one to two hours to reach their destination. In some day hike centre mountain bikes also are easily accessible, which might be an adventurous journey. After a day long mix-up with local people, culture, tradition and enjoying local varieties one can come back in the evening to his hotel. Or, if any one wishes to enjoy a night with local culture and tradition there is also the provision of home stay facility, where you can stay with your host family as a family member.

Pokhara is a valley of natural and cultural beauties and attractions. Within an area of 123 sq km there are hundredth of tourist attraction sites, some of them are as below:

Phewa Lake is a prominent lake of Nepal. It lies on the west corner of Pokhara valley. It is approximately 5km long and 1.5 km wide and covers an area of 4.4 sq km. The west bank of lake is surrounded by green rolling hill and thick forest and on the east of the lake there are hundredth of hotels, lodges, restaurants, travel and trekking offices, shops and other tourist related service centers. Boating on Phewa Lake is a thrilling moment that you can enjoy at a time the smiling virgin Machhpuchhre on the far north, thick forest with rare wildlife and hiding scene of fishtail mountain underneath o your boat. 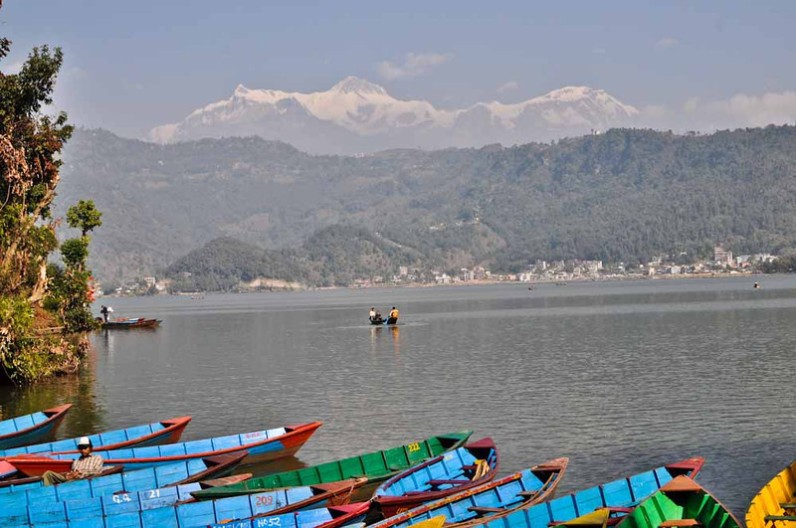 Boat trip in the lovely Phewa Lake is the foremost attraction of Pokhara. Paddling out into the middle of the lake is a nice way to spend a quite afternoon. Phewa lake is the largest lake in Pokhara valley and the second largest lake in Nepal. Encircled by Sarangkot and Kaskikot hills, the lake holds a pagoda-style temple. Another attraction is the reflection of Mount Machhapuchhre and Annapurna range on the crystal clear water of the lake. While boating in Phewa Lake, you can see several varieties of fish.

In the middle of Fewa Lake on a small island Barahi temple is situated. It is not only a holly shrine of Hindu devotees but also a best spot to observe surrounding hill and settlements including towering and pointed peak of beautiful fishtail mountain. A five minute boat ride reaches the island. Religious functions like marriage, birth day celebration, wish fulfilling pooja are performed.

Pokhara valley is a valley of geological wonder. Because of the three major caves and Seti Rive,r the inner part of the valley has many natural tunnels. They are still to be explored. Seti River has made awesome gorges in many sections. In some section the gorges goes more than 200 meter deep whereas the width is just about 20 meters. The best places to observe the wild feature of Seti River are K. I Sing Bridge, Mahendra Pool Bridge, Prithivi Chowk Bridge and Some other small crossing.

On the south west bank of Fewa Lake and on the top of Raniban, World peace Stupa is a best site for day hike and birds eye view of Pokhara valley. One hour gentle trek to the top is also a best opportunity to experience local culture and tradition. Stupa site is a most favored site for internal and external tourists. Fewa Lake looks just underneath of the stupa and the towering fishtail mountain is one of the eye catching views from f the site.

In Pokhara valley there are there Tibetan Buddhist monasteries in three corners east, south and north –west. They are established during the period of Tibetan refugee influx into the country in the time of Cultural Revolution in China. All the monasteries are worth visiting to experience Tibetan culture and tradition.

At the lower end of Fewa dam a small fountain is named as Devi’s fall. The fall is named after the name of an ill fated tourist who was swept way by a sudden flow of Fewa Lake. The relaxing tourist did not know the sudden out flow of the water and swept way into the tunnel or craves and disappeared. Since then the fall has named as Devi’s fall and has become a popular sight for the visitors.

Gupteshower is a cave just the other end of Devi’s fall. Inside the cave a natural statue of lime stone has stand.  People believe that the lime stone statue is a symbol of lLord Shiva. Today the cave is popular as a religious site of Hindu pilgrimages and in many religious occasion, devotees from all part of the country and even from India too devotees visit the site. There is a small tunnel connecting Gupteshor cave to Devi’s fall. The access is easy and takes only 10 minute to cross and reach the pond made from the fall.

Pokhara valley as mentioned above is a valley of lakes and caves. There are three unexplored caves, Mahendra, Chamere(bast) and Gupteshow caves. Mahendra cave is the biggest one and is still unexplored. After a five minutes walk the cave is divided into two parts and if you go further there comes another branch. The cave is a wonderful creation of natural limestone. Before you enter into the cave you need to arrange some logistic supports with the cave management committee. City buses, taxis and private car run regularly to the cave from the city centre. Nearby the Mahendra cave there is another cave named as bat cave where thousands of bat have made their home. Both caves are worth visiting.

On a hillock, there is a sacred temple of Goddess Bindabasini as a symbol of wish fulfilling Devi. Everyday hundreds of devotees visit the temple. The temple area is also a perfect centre for sight seeing. Located close to the Baglund Highway Bindabasini temple is a oldest temple in Pokhara.

In Pokhara valley and periphery there are four Tibetan refugee camps, one to the south at Chhorepatan, next at the city centre at Prithivi Chock, the third one is to the north of valley at Hemja and the fourth is to the east at Dulegaudea on the way to Kathmandu. All these camps are worth visiting to experience traditional Tibetan culture and tradition.

Located inside the P. N .Campus, Annapurna museum is a Nepal’s only one butter fly museum. The museum has preserved more than 500 species of butterfly and many species of birds. It is popular among the scholars and researchers.

IMM has an impressive exhibition of the customs, tradition, heritage, culture and way of life of the world mountain peoples around the world. IMM’s gallery presents the geological facts about the origin of world mountain system, the gallery displays and gives explanations on the subjects like geology, glaciology, rivers originated from the mountain or glacial rivers, mineral deposits and flora fauna etc.

located at the city centre, Pokhara regional museum is the best site to observe and experience the culture and tradition of different ethnic communities of Nepal.

International Mountain Museum (IMM): – Nepal is a leading country in mountaineering where more than 1310 Himalaya pecks above 6000 metres including 8 eight thou sender out of fourteen in the world are scattered from east to west along the 800 miles long northern boarder of the country. IMM is only one museum in the world to preserve mountaineering history and equipment used by different climbers since the mountaineering history began. Inside the museum compound there is a climbing wall and a replica of Mt. Manaslu Himal.

Nepal is known to the world as a country of brave Gurkhas. Gorkhali had bravely fought during the first and second great world war. The museum is a collection of their brave history as well as the equipment and dresses used by them and medals they had received. There is also a wide range collection of Nepalese army history and their dress and equipments.